Ywj Siab Lor is an artist and dancer and a youth mentor in Wilder’s Youth Leadership Initiative who engages with peers and others in a friendly and confident manner. But Ywj Siab, who uses the pronouns they/them/their, wasn’t as talkative at the start of their freshman year of high school. “I was overwhelmed, and I was just terrified of high school,” says Ywj Siab, now a 16-year-old junior at the St. Paul Conservatory for Performing Arts.

When Ywj Siab spotted a flyer for the Youth Leadership Initiative, Ywj Siab’s sibling knew students who had experienced personal growth through the program and persuaded Ywj Siab to join. Ywj Siab was hesitant and had second thoughts even while packing for their first leadership retreat with other participants. But Ywj Siab’s sibling prevailed. “So I went on the first retreat,” Ywj Siab says. “I fell in love with it immediately.”

The program is based on the belief that true leadership includes the practice of vulnerability and authenticity, with cultural self-awareness as the first step toward authenticity, says Tené Morgan, YLI’s program coordinator. “Many people reach barriers in their leadership journeys because they feel they haven’t been given permission to be themselves,” Tené says. “YLI participants find the permission to be unapologetically themselves and share their authenticity with each other, their families, schoolmates, teachers and greater community.”

Ywj Siab was surprised by the energy of the young leaders at the weekend-long retreat. “I assumed it was something that adults would lead, but it was all led by high schoolers,” Ywj Siab says. “That was something intriguing and new to see youth like me leading.” Ywj Siab also appreciated the willingness of participants at the retreat to be vulnerable with one another and share deeply personal stories. Through a cultural simulation of the Hmong experience, Ywj Siab learned about their family and their cultural group’s history. Later, a different cultural simulation and other activities helped them understand the perspectives of other participants.

“I thought it would be like a school program, but it was very different, all hands-on learning activities. I love doing things with my hands,” Ywj Siab says. “YLI provided that space for me, which is how I basically blossomed.”

Authenticity and Vulnerability Are the Magic of YLI

Outside of the Youth Leadership Initiative, Ywj Siab used their newfound confidence to take action on a childhood dream of becoming a performing artist. They researched and enrolled in the St. Paul Conservatory for Performing Artists, where they are focusing on dance.

At the Youth Leadership Initiative, Ywj Siab’s fellow participants nominated them to be a peer mentor at the end of their first year in the program. Initially, Ywj Siab thought a couple people had nominated them, but when they interviewed for the leadership position, they learned that 15 peers had nominated them. “I felt like, wow, everyone believes in me. Maybe I can do this,” Ywj Siab says. 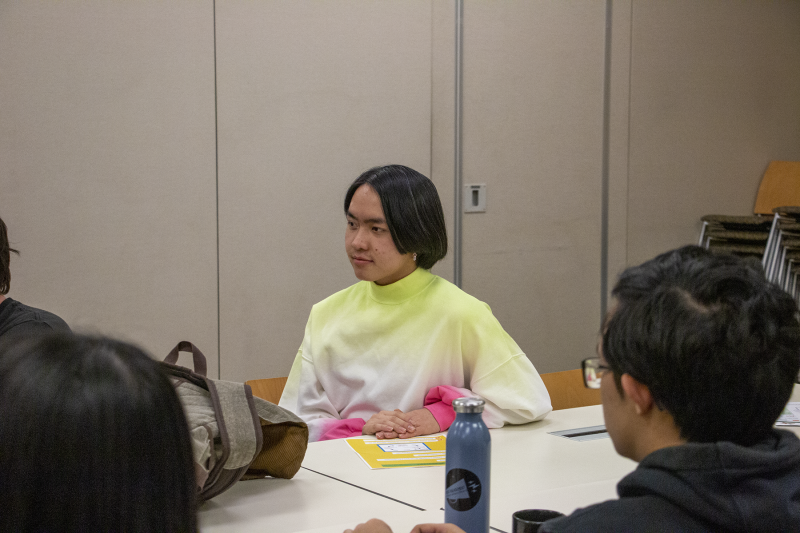 As a peer mentor, Ywj Siab worked closely with other student leaders and staff to lead the leadership program during the next year. Ywj Siab wanted to incorporate more art into the program, so they and other participants created a group called “Express Yo Self!” group for self-expression. Participants collected art, poetry and short stories and worked together to create the book. At the end of the school year, Youth Leadership Initiative participants completed an appreciation yarn activity to tell each other how they have had an impact on each other lives. Based on a ritual in Southeast Asian cultures, they tied strings around a blindfolded participant to preserve good luck. Ywj Siab remembers participants telling them they had changed their lives during his turn to wear the blindfold.

“That’s what the magic in YLI is,” says Ywj Siab, who continues as a youth mentor in the program. “It’s showing up authentically, being who you are, and also helping and praising others and giving them space to shine too. I think we need more of that in this world.”

I thought it would be like a school program, but it was very different, all hands-on learning activities ...YLI provided that space for me, which is how I basically blossomed.”

Ywj Siab Lor wrote this poem about the growth they experienced as a participant and youth mentor in the Youth Leadership Initiative.

I miss you a lot… Thus I am writing to you now. Remember how you used to always love helping everyone out with their math homework. But has anyone ever told you that if you were to be a triangle, you would be “A-Cute” one. *wink*wink* hahaha… I hope you get the joke. But anyway, do you remember how I loved to hear your stories? Well… it’s my turn to tell you a story. Once upon a time, there was a very shy Little Boy who was left alone in the Dark Ages of Freshman Year High School. But then, you came along. I can’t say that He wasn’t skeptical about you at first but I’m pretty sure you already knew that. Remember when you told Him to get on that really high roller coaster called “The Retreat”. He didn’t want to but you said, “Being an able leader. There are always...” and pushed Him on the ride anyway. He cried a lot… but being so high up, the Little Boy noticed something. He began to see, to hear, to smell, to taste, and to feel the world around him. Many other youths of color were just as scared, weird and crazy as He was about going on this ride. They were all different from each other but for the first time, the Little Boy didn’t feel so alone in His own skin. Even after that He wanted to ride it again. But then you asked if He wanted to jump off a cliff instead. The Little Boy was so confused until you told Him to not think and just dream. You pushed Him off a cliff anyway. The Little Boy cried while falling off the huge cliff. But the Little Boy thought of his dreams as high as the clouds. Before He knew it, the Little Boy was flying and His dreams were written all over the skys. It was like magic. But that’s the end! Sorry if it was a really short one. I know your stories usually take longer but I'm kinda running out of space to write now. So I guess, I’ll talk to you later then.

P.S. Thank you for everything Youth Leadership Initiative.