Monica Vega laughs when she thinks about how many people she has influenced because of her involvement with the Latino Leadership Program at Wilder. She teaches art to children, mothers and older adults at a nonprofit organization in Minneapolis. She advocates for driver’s licenses to be available for Minnesotans without documentation. She volunteered with Saint Paul Public Schools to create a more supportive environment for Latinx students.

Discovering the Capacity to Lead

After her first experience with the program, Monica jumped at the chance to get involved when she read about an annual Day of the Dead celebration at the Minnesota History Center. Drawing on her artistic skills, she built an elaborate altar, called an ofrenda, to honor and remember ancestors and loved ones.

Later, Monica began working with Centro Tyrone Guzman, a nonprofit in Minneapolis, where she teaches art to children, youth, parents and elders in the Latinx community. Monica has incorporated art created by her classes into ofrendas at the Minneapolis Institute of Art for a Day of the Dead celebration, and has created ofrendas for other organizations.

Her work building ofrendas is deeply personal as well as a way of giving back  to the community. Monica’s father passed  away when she was 14, and his photo is included on the ofrendas. “I want my kids to remember him, even though they have never met him,” she says. 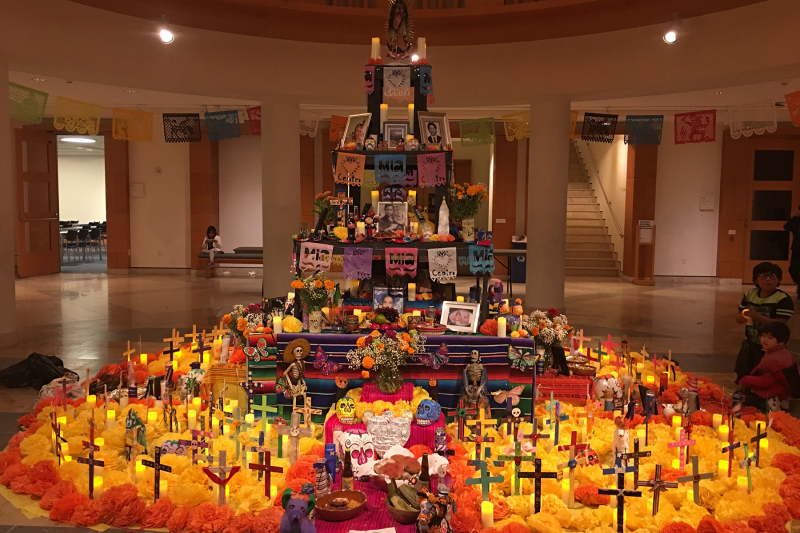 Ofrenda by Monica Vega at the Minneapolis Institute of Art

Igniting Change in the Community

With encouragement from a Latino Leadership Program facilitator, Monica joined Wilder’s Neighborhood Leadership Program, which led her to local politics and policy issues after learning about the legislative process. Inspired in part by her mother, who had been involved in politics when the family lived in Mexico, Monica has worked on redistricting issues in the past and is now part of a group working for legislative approval of Minnesota driver’s licenses for people who do not have documentation.

Monica joined the Latino Consent Decree Parent Advisory Council and served as chairwoman for four years. The Council advises Saint Paul Public Schools about the education of Latinx students who have limited English proficiency. “We learned a lot about how we can fight for the rights of our kids,” Monica says.

Monica continues her involvement with the Latino Leadership Program as a volunteer, both to remind herself of the lessons she learned and to help others unlock their leadership potential. “People need to learn that leaders are not the only ones who stand up in front of the room,” Monica says. “All of us, we are leaders, but it takes a little while to learn that. This program will show you how you are a leader.”

What I learned from the Latino Leadership Program is that you can do things that you don’t even believe you can do. It makes you feel  stronger and ready to conquer the world.

Since 2013, more than 1,500 changemakers have participated in Wilder’s Community Leadership Programs. Wilder cultivates diverse community leaders who are driven to make a positive difference with purposeful engagement and values driven leadership.