During her three years at Lincoln Place, 23-year-old Rachel worked hard to finish school, start a career, build credit and understand and work through trauma. She recently marked a major life milestone when she moved out of the supportive housing development for young adults who have experienced homelessness.

As Rachel reflects on her achievements and her life at Lincoln Place, she has one important lesson to share:

“You are not your mental health,” Rachel says. “I struggled with that a lot and I thought that I was just like the embodiment of my mental health, but mental health is not me. I'm my own person.”

The transition to life in stable housing takes time and patience

Rachel left home at 19 to remove herself from a mentally and emotionally abusive situation. She stayed with friends and continued taking classes to graduate from high school until she moved into a studio apartment at Lincoln Place. There, she began the work of healing and building a stable life for herself.

Lincoln Place is a partnership between Wilder, Dakota County, and the Dakota County Community Development Agency. Wilder provides supportive housing services for young adults ages 17-24, including staff on-site 24 hours a day and case managers who help them connect to resources and pursue their goals. 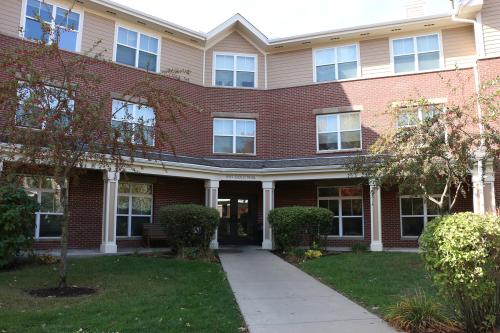 When she moved in, Rachel was surprised by how nice her apartment was. Like many youth who move into supportive housing after being unhoused, her full reaction to a space of her own was mixed.

“I was really happy,” Rachel says, “but at the same time, I was dealing with really bad mental health, so I felt really alone and unsure of myself.” Rachel stopped attending classes for a few weeks while she took time to adjust to her life at Lincoln Place. Often, residents who move into Lincoln Place after experiencing homelessness temporarily reduce or take time off from work or school during their transition to stable housing.

As she acclimated, Rachel began pursuing her goals and achieving milestones. Her case manager, Molly Rinehart, offered guidance and support along the way. One of their first big goals was obtaining an identification card for Rachel. Because Rachel was born in Russia and adopted in the United States at age 5, Molly and Rachel needed to figure out how to get Rachel’s birth certificate translated. “That was really difficult, but we got it,” Molly says with a smile.

Rachel completed high school and, shortly after earning her degree, she found work at a nearby clothing store. A year later, she used her work experience to obtain a management position at a different clothing store. She took a Wealth Building course and used her new knowledge to obtain her first credit card. Overall, Rachel did so well at Lincoln Place that she transitioned from a housing program that covered her full rent to one in which she paid 30 percent of her income toward rent.

As Rachel worked on her education and financial stability, she continued to struggle with her mental health, including hospitalizations for suicide attempts and self-harm. Rachel decided to focus on her mental health after seeing other people’s life accomplishments and realizing she wanted those same achievements. She began working with a therapist who helped her learn to manage post-traumatic stress disorder.

“We really sorted out, ‘Okay, well you do have PTSD, how can we work around that so that you're not weighed down by it, and you can finally start doing the stuff that you want to do,'” Rachel says. “So that was really helpful.”

From Lincoln place to her own place, Rachel was ready to begin her life with hope and a new home

Rachel says her mental health has improved, though she continues to work on her mental wellness. During fall 2021, she decided that although she liked Lincoln Place, she was ready for a place that felt more like her own. Rachel and a close friend started looking for an apartment together and were quickly approved for a two-bedroom apartment paying market-rate rent. She moved in November 2021.

Rachel likes to read, write and watch movies in her spare time. She also likes art. At Lincoln Place, Rachel’s apartment was decorated with collages Rachel made by arranging magazine photos she thought worked well together.

“I see so much hope in art pieces,” Rachel says. “It gives me the hope that, well, there’s so much happiness in this piece and so much life in this piece, that maybe I can do that too, but replicate it in my own life.”

You are not your mental health. I struggled with that a lot and I thought that I was just like the embodiment of my mental health, but mental health is not me. I'm my own person.

Youth Homelessness by the Numbers

The 2018 Minnesota Homeless Study conducted by Wilder Research estimated 13,300 youth on their own experience homelessness over the course of a year in the state. Researchers found that: