Storytelling With Data: Where Do I Begin?

Some of you know that I taught courses in undergraduate introductory statistics, prior to coming to Wilder Research. My classes were for students who needed a math credit for their degree, but who weren’t necessarily looking forward to a math class and who occasionally brought a fair degree of “math phobia” with them.

I like to think that students left the class with a greater appreciation of statistics, primarily because I didn’t teach it as a math class. Rather, I started with the idea that statistics is a language. Learning a language is challenging, but it allows us to communicate and tell stories…in this case, with data.

So here’s a short primer on telling stories with data on Minnesota Compass. I start with these same questions myself when reviewing and building stories from data on the website.

Start by seeing where things stand. What is the most recent estimate? You’re just looking for one number: a percentage, a median, a number, a count.

Let’s put this into practice with the Poverty key measure. This chart shows that Minnesota’s poverty rate stands at 9%, with 494,700 living below the poverty threshold in 2019.

On Minnesota Compass, our “top-level” chart will usually have what you’re looking for. For example, our top-level chart in our Poverty key measure shows that Minnesota’s poverty rate stands at 9%. Flip to the Data & notes view using the far right drop-down and we see that 494,700 people lived below poverty in 2019. 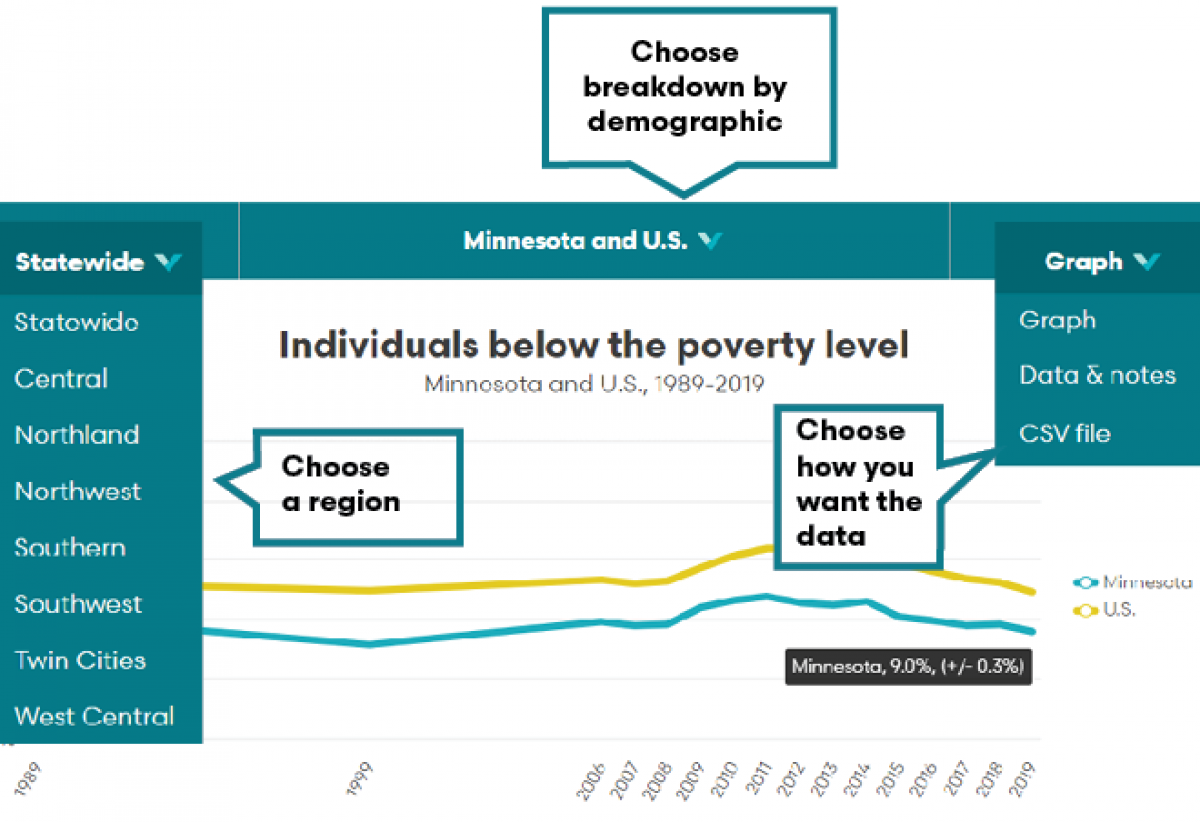 Help translate for your audience. Give them something that helps them understand your “one number.”

2. How does that compare?

3. Where do we see disparities?

As important as it is to see where things stand at a high level, it is equally or more important to see where things stand for smaller populations (subpopulations or subgroups). Minnesota itself is a case study in the importance of digging below the surface on quality of life measurements. At the state level, we commonly perform quite well on quality of life measures, but remain home to some of the largest disparities by race and ethnicity in the nation.

While Minnesota has a poverty rate that is below the national rate and lower than most other states, digging deeper shows us that Minnesota is home to large disparities in poverty by race and ethnicity. In particular, American Indian and Black residents have poverty rates that are three times higher than the state poverty rate (30% and 27%, respectively).

On Minnesota Compass, our top-level chart will usually show a trend line comparison of Minnesota and the United States. You can use this chart to see whether Minnesota is getting better, worse, or staying the same as previous points in time. You can also compare to the national estimate. Hover over the center drop-down to select the “comparison with other states” breakdown to see where we stand relative to other states.

Well, yes and no. This will give you a good start, especially if you are relatively new to storytelling with data.[1] To round things off, I just have a couple more hot tips to make your data stories as interesting and accurate as possible.

[1] The more data savvy among you may find that this article falls short. Where is the material about sample versus population, measures of variability, and alpha levels? What about issues with repeated statistical testing? I get it…I do. But for the folks who are using this primer, we probably don’t need to get that far into the weeds. Let’s not scare people off. We’re just starting gently here. 😊 You and I can talk statistical inference over coffee.