The study runs alongside the Minnesota Homeless Study.

Wilder Research worked with participating tribes to collect information in October 2018 through 1,226 interviews with people experiencing homelessness or near-homelessness. On the day they were surveyed, these respondents were accompanied by 1,089 others – including significant others, friends, and children.

In total, 2,315 people were counted as part of the study.

The percentage of study participants meeting the federal definition of homelessness continues to climb.

Compared to previous years, a greater proportion of respondents were experiencing literal homelessness. Some of this growth can be attributed to increased shelter and transitional housing infrastructure on reservations as well as significant outreach efforts. 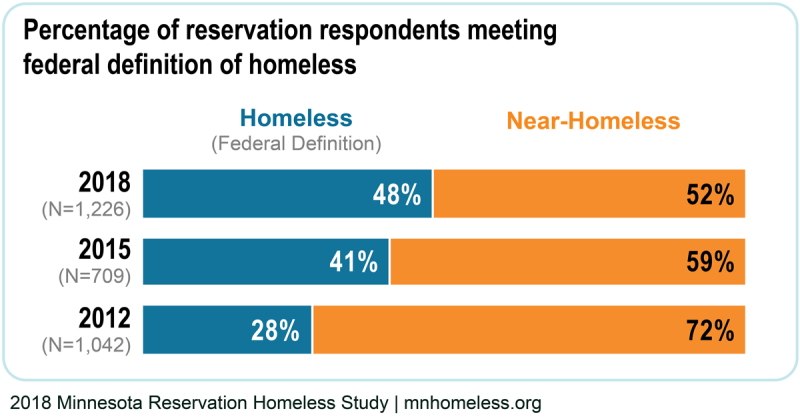 This brief summarizes findings from the 2018 study conducted in partnership with six of Minnesota’s American Indian reservations. Read the report »

Children, youth, and elders make up half of the homeless and near-homeless population on participating reservations.

Many families experience homelessness or near-homelessness on reservations – including those with small children. More than 1 in 4 respondents were parents accompanied by their children, and over half (52%) of all children with these parents were age 6 or younger.

Doubling up and near-homelessness on American Indian reservations are common.

70% of respondents were doubled up – that is, staying with a family member or someone they knew rather than living outside or in places not intended for human habitation. Doubling up has historically been the most common form of homelessness on reservations. Anecdotally, we know this is due to a strong cultural tradition of not letting one’s relatives go without a place to stay when you have a home.

Doubling up is not a common preference among the American Indians surveyed. Nearly all respondents (99%) would live in their own housing – not doubled up with family or friends – if they could find or afford it.

Among those who were doubled up, overcrowding and substandard conditions are concerns.

Reservation respondents exiting jail or prison need more supports and services to find housing. 74% of respondents who were recently incarcerated were homeless upon entering a correctional facility, 34% did not have a stable place to live when they exited a facility.

Reservation respondents generally reported low utilization of public benefits and services, with 37% receiving public assistance in the form of cash benefits in the month prior to the survey. These findings indicate that people experiencing homelessness on reservations may need more support to connect to public services and benefits for which they may be eligible.

One of the key groups addressing these challenges is the Minnesota Tribal Collaborative to Prevent and End Homelessness, which consists of members from five of the tribes participating in this study: Bois Forte, Leech Lake, Mille Lacs, Red Lake, and White Earth. Collaborative members meet regularly to share ideas, learn about new resources, apply for funding, and advocate for state-level changes to better address homelessness in their communities.

Your support provides a better understanding of the prevalence of homelessness in Minnesota and the circumstances of those experiencing homelessness.

About the Minnesota Homeless Study

The Minnesota Homeless Study, conducted every three years, is a point-in-time study aimed at better understanding the prevalence of homelessness in Minnesota, as well as the circumstances of those experiencing homelessness.

More about the Homeless Study

Get updates about the study

Sign up to receive updates, new data releases, and learn about opportunities to be involved in the study.